"Somewhere.. in the middle of nowhere..."

This is a diversion of sorts - some thoughts and links accumulated over the past few months.
Darkroom photo enthusiasts, I haven't lost my mind, next couple of posts will *definitely* be darkroom montage!
There's some digital images here, if you follow this all on, to my webpage.

Has this miserable economy affected you? I guess not many people reading this would say 'YES!'.
It hasn't affected me as much as many, but the drop-off in a second passive/inheritance income has reduced my travel budget to Zero! Nada! Zilch!!
So I relive my last trip, to Nevada in late 2008 by looking over, yet again, the digital/color captures frame by frame, all 600+ of them.
("Yum, yum - & don't bogart that joint, puh-leeze!")
Late one night, after looking over a lot of these, & after a few drinks, and a couple of bowls, I used a few Kb's of memory to record these thoughts.
You can 'like 'em...love 'em... or hate them...' but at least, I suggest you think about them -
how many mystics and religious savants have found wisdom or enlightenment of some sort in the desert?

Somewhere.. in the middle of nowhere, in the desert...there is something incredible to be found.
it's called 'yourself'. Just you, and nothing but you.
But the hard part is... you've got to drop 'everything else you think you know' to get there.
NO cell phone, blackberry, none of that crapola. Get out of the car, walk a mile into the landscape.

I like....
the silence, except for an occasional crow.
...the enigmatic qualities of the land - it is very dry now, but if you think about it, and look at it hard, this land has been formed by water (rain), over the passage of probably hundreds of thousands of years.
The land is soooo raw and rough, yet there are many plants and animals that happily call it home.

That's why I like the desert. It has no mercy, cuts you no slack.
Even if you are a casual observer/traveler.. it's hard to miss.
It's severity is stunning. You either 'get it' or you don't.
The people who lived here a thousand years ago...?
They apparently didn't think it was too severe - they survived just fine.
Could you?... or me?... I highly doubt it.
Most of us pass thru in gas-guzzling oil powered vehicles, oblivious to anything but...
our personal comfort, and maybe the next exit, restaurant and motel.
I must admit, that describes me much of the time, but at least I can realize what I am missing/forgoing,
by making the choices I do.
I don't expect to get any medals or gold stars on my forehead for realizing this.
I am more than a bit of a wimp, compared to people who lived here long ago.

A few more images from a Nevada trip in late 2008:
www.bobbennettphoto.net/BeachBlog_2010/Nowhere/index.html

If you want to read about someone who is much sturdier than I am?
(That would be a certain writer, Craig Childs)
http://www.houseofrain.com/rantsandwritings.cfm

No matter how much of the desert just northeast of LA has been consumed by development, it's pace has been greatly slowed not only by economic implosion, but by the reality of the places we attempt to civilize. - they are just too raw for modern living. 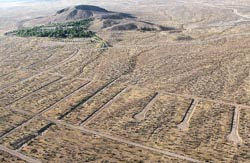 California City’s “second community” has miles and miles of mostly unpaved streets -- a ghostly monument to overreach. In the background are a park and country club.
(Photo credit:Robert Gauthier / Los Angeles Times / August 3, 2010)

A desert city that didn't fan out
Nathan Mendelsohn, a professor turned developer, believed California City would become the state's next metropolis. Instead it's a sleepy outpost that exists largely in the imagination.
The rest of Mendelsohn's eccentric dream unfurls to the east, some 185 square miles of mostly unpaved streets — a ghostly monument to overreach that, from above, looks like a geoglyph left by space aliens. Only Los Angeles and San Diego leave a bigger footprint in the state.

I've driven through here, once many years ago - it looked exactly like the outskirts of Phoenix, or Las Vegas. Big plans... come to nothing.

How little we know or understand., especially about people who lived here only a few thousand years ago. They seemed to have do just fine, and had the time to make some 'art' - that's what we call it, I think they would call it 'worship'.
I have found this to be the most interesting petroglyph I have stumbled upon.
The human figure seems to be related to the cracks in the rock.... or maybe not?
If you think petroglyphs are an enigma, geoglyphs are even more so. 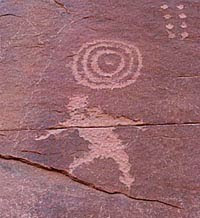 This is the story that kicked this particular entry off, it's months old, but the header in this blog reads "no attempt to keep up w/ the frenetic pace of many blogs " - this is a leisurely and I hope well thought-out series of posts.

"There are more than 1,500 geoglyphs extending over 190 square miles, according to the National Geographic Society. They were constructed by the Nazca culture about 2,000 years ago.

Though they're virtually indecipherable from the ground, from the air they are clearly visible as a monkey, a killer whale, a hummingbird, a condor, a pelican among flowers, trees and geometric shapes.

The Nazca Lines are believed to have had ritual astronomical functions, according to UNESCO, which designated them a World Heritage site in 1994."


Canyon of ancient ones:
http://www.youtube.com/watch?v=IpDeGsOUYZY

YouTube does a really good job of offering similar content to your choice, it shows up in the column on the right.
Here's one:

The Prophecy of Native American Elders
http://www.youtube.com/watch?v=0TiCBrFQUa0&feature=related
2012 Prophecy
Posted by CaliforniaSilverwizard at 5:15 PM No comments: