"life liberty and pursuit of happiness!"

1/29/2011
I've railed for along time about the down sides to this new technology, and there are many... but when i see what is going on in Egypt, and watch the constant stream of twitter updates on abc.news.. and how ( egyptian) people are making some things happen that were not on any prognosticators map?
I can't help but cheer!!!
I am also listening to a collection of Mark Isham work, soundtracks to recent war related movies, that's my soundtrack to this... a very good one.
People are standing up, and some are dying....
MLK said in his speech on the Wash. DC mall many years ago, in so many words.... "life liberty and pursuit of happiness!"
"the riches of justice, the security of freedom"
http://video.yahoo.com/network/100000054?v=100768&l=8576754
if you have never watched it, watch it NOW!
The message seems to resound, and echo, across the world.... no matter how many years it's been.
...and no matter who hears it? they definitely get it!
Bob Marley said it pretty well too - "get up, stand up, stand up for your rights!"
I think many americans are watching w/ bated breath - we definitely want you to succeed! - !!! an end to the dictator!!!!
Posted by CaliforniaSilverwizard at 3:05 PM No comments:

But first... the 'whatever catches my eye' file is fat!

Photo Enlargers Loom Like Dinosaurs of the Film Age
January 18, 2011 - by Pete Brook

well, my Beseler 45MX has a very secure place in my bathroom... which doubles as a darkroom. Hell will freeze over before this changes....

Font fans may be typecast, but they love it
Alec Scott, Special to The Chronicle
Wednesday, January 12, 2011 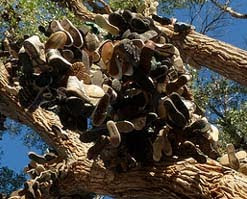 Definitely dastardly vandalous assholes!!
'Hang 'em high', I say!
http://news.yahoo.com/s/yblog_thelookout/20110104/us_yblog_thelookout/famous-shoe-tree-chopped-down-by-dastardly-vandals
There are a few shoe trees that haven't made headlines, and I hope they don't suffer the same fate.
They are a marvelous communal work of art, that should be left for all passerbys to enjoy - there's nothing nicer than coming upon something like this, in the middle of nowhere.
---------------------------------

Computers That See You and Keep Watch Over You
Published: January 1, 2011 - NYTimes - By Steve Lohr
http://www.nytimes.com/2011/01/02/science/02see.html?_r=1&hp
'Despite such qualms, computer vision is moving into the mainstream. With this technological evolution, scientists predict, people will increasingly be surrounded by machines that can not only see but also reason about what they are seeing, in their own limited way...'

AWESOME!!! If you haven't seen this, check it out!!!
http://news.yahoo.com/s/yblog_thelookout/20110103/ts_yblog_thelookout/explorers-discover-spectacular-caves-in-vietnam

If you want to see ALL the images:
http://ngm.nationalgeographic.com/2011/01/largest-cave/jenkins-text

Mysterious piano appears in Fla. bay:
http://news.yahoo.com/video/odd-15749658/mysterious-piano-appears-in-fla-bay-23964769
Now if Jerry Lee Lewis or Little Richard showed up to pound those keys?... that would be awesome, wouldn't it??


Time to take a break, shake it up a bit... some dig. pix from a recent day trip...
San Francisco is a pretty unique place to live, there are so many interesting places to go for photography. I guess you could say that about many other places, too...But so far, after living here for 18+ years, I have no thoughts of moving anywhere else.
Alcatraz is in the middle of the SF Bay, 1.5 miles from the city, but that 1.5 miles is a killer, literally. The water is never more than 55 degrees, the tidal currents are treacherous.
A great place to put ... a Starbucks and Burger King?... No way - how 'bout..a prison!

Initially Alcatraz was a military prison, and eventually became a federal penitentiary, for the most hardened & incorrigible inmates.
http://en.wikipedia.org/wiki/Alcatraz_Island

You get there by buying tickets (for the boat ride) in advance, online, they are usually sold out for several days in advance, if not more.
So I got myself a ticket on 1/15 for the next day, being totally bored w/ living in front on monitor.
We'd had a whole lot of fog in recent weeks - not coastal fog, but tule (valley fog) that forms on the central valley, and works it's way out thru the delta. It's super dense, and it hadn't been clearing hardly at all. I took a chance... and it paid off - I like some good strong sunlight - just what i like! -
Sunlit hi-lites, and deep shadows! Big contrast!

The island has a lot of interesting architecture - I photographed architecture for 10 years back east ('82 - '92) and I still find it interesting.
So here's a small preview: 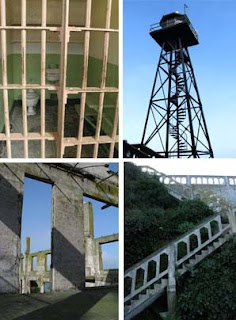 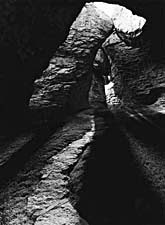 If, after all this, you need a laugh?....
I couldn't possibly come up w/ anyone who could do it better than Richard Pryor!
Star Wars bar:

I always check the links before I post, and just checking the link?... I watched at least half of this, again. For the 20th time!
RIP, Richard. This was broadcast on SNL, so it is heading out into deep space, indefinitely.
I hope whatever aliens receive it?... are 'LMFAO' too.
Posted by CaliforniaSilverwizard at 6:28 PM No comments: