Here's the photoshop sketch of the darkroom print for this post:

But first, as always, the 'whatever catches my eye' file...

Short video, HUGE wave!!!!
http://www.grindtv.com/surf/blog/30981/is+this+the+largest+wave+ever+ridden/
-------------------------
A Store of Images, From a Time When ‘Cut and Paste’ Meant Just That.
(London Bookstore sells clip art in an online world)
By Noam Cohen - Published: October 30, 2011, NY Times.
"... The books that dominate the shelves — large paperbacks with prosaic titles like “Animals” or “Plants” or “Hands” — are more like catalogs of random images that have one thing in common: their age.
Dating largely from the 19th century and culled from old magazines, advertisements and books, these pictures are not covered by copyright laws. Artists around the world can use the images any way they want — cut and copied, altered or combined. No one “owns” them anymore.
Artists describe these books of “clip art” as a spur to creativity — a way to conjure up the curved outline of a lion or the way a hand grasps a hammer. But they are also ready-made images, often of high quality, that can be easily reused or repurposed.......
These clip art books, with dozens of examples of plants, pipes or old-fashioned mustaches, show that people were happily doing image searches long before they had the benefit of a search engine. And people were manipulating those images long before they could click and drag them.

Friday, November 4, 2011 9:10am PDT
Flock of Starlings aerial ballet
By: Pete Thomas - GrindTV.com
Do you know what a 'murmuration' is, and have you ever witnessed such a dazzling display of avian behavior? The accompanying video shows an enormous flock of starlings - a murmuration - swirling through the sky in a magnificent ballet that almost seems choreographed.

Menacing storm clouds
Photographs of dark thunderstorm clouds from around the world. 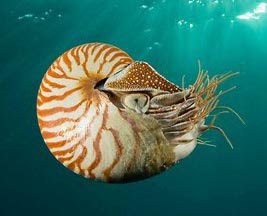 Loving the Chambered Nautilus to Death
Published: October 24, 2011 - New York Times - By William Broad
It is a living fossil whose ancestors go back a half billion years — to the early days of complex life on the planet, when the land was barren and the seas were warm.Naturalists have long marveled at its shell. The logarithmic spiral echoes the curved arms of hurricanes and distant galaxies......

"The identification of these gigantic cells in one of the deepest marine environments on the planet opens up a whole new habitat for further study of biodiversity, biotechnological potential and extreme environment adaptation," said Doug Bartlett, the Scripps marine microbiologist who organized the expedition."

Op-Ed Contributor Running Out of Bandwidth
By LOWELL C. McADAM
Published: October 21, 2011
Demand for faster speeds and more applications is growing at a tremendous rate. But without prompt government action, the lifeblood of this innovative sector of the economy is at risk of being choked off.


http://www.cnn.com/2011/10/18/travel/galapagos-tips-destination-adventure/index.html?hpt=hp_c2
-------------------------
Big-Game Hunt Adds to Evidence of Early North American Settlement
By SINDYA N. BHANOO
Published: October 20, 2011
For many years, it was thought that the Clovis people were the first humans to populate North America, about 13,000 years ago.
But recently, evidence has suggested that other settlers arrived earlier, and a new study lends support to that hypothesis.

Jonas Pfeil, a student at the Technical University of Berlin, noticed that there was no easy way to take a complete spherical, panoramic photograph. Even if you had enough cameras and the right software, you would still have the problem of a tripod or camera mount blocking one angle. The solution? A rubber ball camera -- just toss it in the air. 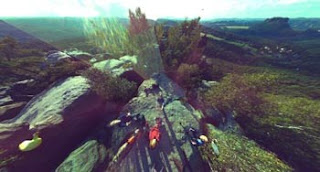 Lytro ready to release 1st light-field camera
Unlike existing cameras, the Lytro captures all the rays of light in a given scene, as opposed to flat images, creating a range of new possibilities. Photographers can change the focus of an image as often as they like, for example, and by next year they will be able to present their images in three dimensions.

One sentence in this article really caught my eye:

"Regular cameras are too hard to use," Ng said. "They had all these modes and buttons and settings. We stripped that all away."

Yeah, i 'second that emotion', but i don't think the Lytro is the answer, at least, not for me - how 'bout a digital camera without all the bells and whistles, just controls like traditional cameras ( shutter speed, depth of field/aperture ) and.... a lense that is SHARP! And, yes, at a decent consumer level price!

Fear and Loathing.... at Rolling Stone
Excerpts from the essential writings of Hunter S. Thompson:

Playtime is over for cassette tapes.
Wordsmiths over at the Oxford English Dictionary say “cassette tape” has been removed from the pages of its Concise edition to make room for words such as retweet and cyberbullying, USA Today reported earlier this month. (Note: The word will remain in the unabridged version.)
Yes, it’s a sad time for cassette tape enthusiasts and those of us who still have a dusty shoe box filled with mix tapes, their labels decorated with colorful doodles and lame titles such as “Amy’s RAGE tape” and “Madonna Madness.”
But while it might be depressing to think tapes are so passé that they can’t even make it into the dictionary, Oxford’s decision makes sense. Auto makers recently stopped equipping their cars with cassette decks. And who has a working cassette player in their home anymore? My Sony boom box died years ago.

http://video.nytimes.com/video/2011/10/21/automobiles/collectibles/100000001128225/chevrolet-turns-100.html
A Century of Chevy, From Cheap Date to America’s Sweetheart
By JERRY GARRETT, JAMES G. COBB, PHIL PATTON, STUART ELLIOTT, JOHN PEARLEY HUFFMAN and NORMAN MAYERSOHN
Published: October 21, 2011
"Its Impalas dropped us off at school. Its pickup trucks hauled our produce on the farm. Its Corvette sustained our sports car fantasies through the boredom of high school algebra class. Earlier than almost any other automotive brand, Chevy created a palette of vehicles that ranged from the small and thrifty to the sleek and sporty to the large and smartly trimmed."
http://www.nytimes.com/2011/10/23/automobiles/chevrolet-unlikely-cornerstone-for-gm.html?hp
("Full disclosure" here??....Yep!, my dad owned and ran a Chevy dealership in a small town in Maine, '55 - '78.)
------------------------------------------
Onward, to some photomontage! 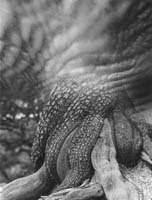 This image is ridiculously simple - a gnarly and warped tree trunk, in Chiracahua (Arizona),
which waited for many years for an answer, for a complimenting sky, equally spinning and swirling.
Is 'mother earth' breathing?... exhaling?.... I dunno. What do you think? I have called it 'transformation tree', which works, for the time being.
The print is very simple dodging/blend - sky dodged out to zero by about the middle, tree dodged similarly, but from the bottom up.
Once again, it's about having the right negatives, and taking the time to figure out which ones work together, to come up with a '1+1=3' kinda thing.
This one is a good lead-in to some discussion about hand-coloring. Some of my prints scream 'color me!'... some don't, but I color them anyway.
This is one image that does not benefit from handcoloring, at all. It works because the texture in the tree bark and in the clouds is so similar. It works well as simple B&W... if i add color? 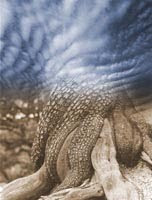 No way, this works against what is going on, it splits the image into 2 sections, brown tree bark, blue sky. You've heard the old saying "less is more"?.... yep, that's the ticket, here. You might think that this rather similar image, "Driftwood face", would strike me the same way. 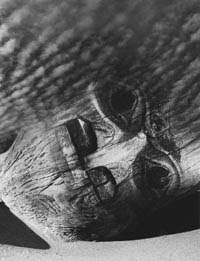 It didn't - my idea? - that some color in those eyes ( what a penetrating stare, hunh?) could 'bleed' into the sky. I did a photoshop sketch, and this one has possibilities: 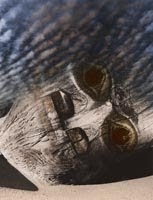 There is one challenging/difficult thing about that idea - the eyes are pretty much dead black - can I inject enough color into them, to make this idea work? It's easier to do digitally than by hand/on the print... I'm gonna give a throw anyway. For larger views of some the images above, a page on my site:
www.bobbennettphoto.net/BeachBlog_2011/TransformationTree/index.html
Posted by CaliforniaSilverwizard at 5:34 PM No comments: