Darkroom - a bucket in the sand... 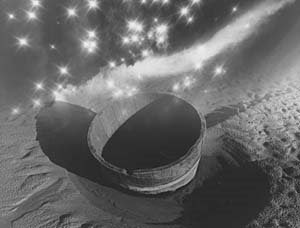 To pick up from where I left off last year...
('The best way to do something creative..
..is to ask a question you don't know the answer to...'
Francis Ford Coppola, in an interview I read a while ago, I think it was in Time magazine.)

The second 'question I didn't have an answer to' was about this bucket of sorts, actually half a barrel, I photographed at Limantour beach at Pt. Reyes a few years ago, swept there from who knows where.

(It's probably a container for a lawn plant, tossed out by some suburbanite?
If anyone gave me (a confirmed apt. dweller) this much dirt to grow something in?
the plant would be illegal! a nice fat bushy cannabis plant!
and I would not be tossing the bucket out, anytime soon.
But someone did, and here it is.)

It's left a trail in the sand, for which I found an 'echo' in a sky made a decade or so ago, from my roof top deck in SF.
Once again just because I 'ask a question I don't know the answer to' doesn't mean that when I get an 'answer' (in the form of an image) that I'll actually understand that, either.
Which is also the case on this one.

This recalls the often quoted question "is the glass half empty, or half full?"

This bucket is obviously beyond that question, it's just plain empty.
but another question remains/is posed, by the swirling starry mass above it -
is this what has been recently released?...
or is it there to refill the bucket??
'Ask me no questions, I'll you no lies', I really don't know the answer.
(Wow, I sure am 'quoting' a lot this time, aren't I?)

Sometimes ambiguity is just fine, you can read whatever you want to into the image.
I enjoy hearing other people's interpretations, sometimes they see things that would never occur to me.

As usual, there's nothing complicated about the darkroom technique - the bucket is exposed 100% at the bottom, and is dodged out to zero by a bit above the horizontal halfway mark. I am not holding the dodging card horizontally level, it's a bit lower on the left than the right, following the angle of the trail in the sand left by the bucket.
The sky negative is pretty thin, there's not much there but the cloud itself, the rest is almost clear plastic.
Perfect for sandwiching with some of those 'stars' I concocted many years ago, and keep reusing.
So that sandwich is exposed 100% at the top, dodged out to zero just shy of the horizontal middle, at the same skewed angle as the bucket, lower on the left than the right.

There is one thing I could have done, that I did not, that would make this one even better -
can you spot it, now that you know the elements involved?

(Hhmmm....
Take a minute to think about it...freshen your beverage/empty the ashtray/make sure the kids or spouse aren't burning down the house, or turning dinner into charcoal/ let the dog in, or out...)

There now, got an answer?

In the enlarged view, you can see a few of the 'stars', softly, descending into the bucket.
On the print (14x18"), they are more pronounced... but what I should've done...?
was to also sandwich the stars with the bucket, so the feeling that they were sinking into/emanating from there was more pronounced/obvious.
With Photoshop? ..this would be very easy to fix, but I have this old-fashioned knee jerk reaction to 'fixing' everything with Photoshop - it's too easy to get lazy and sloppy, and I definitely don't want to end up there.
I've seen plenty of that, it sucks, and is definitely lazy and half-assed.
Who needs that?
I'm gonna leave the image the way it is, like it or not.
Next time, I will think a bit harder.

As usual, larger images are on my web pages:

I heard from someone recently who commented favorably on an entry that compared/contrasted the darkroom treatment of an image ( circular lines drawn in the sand by some windblown blades of grass) with a digital version of the same thing.
I got another similar entry (darkroom vs. digital) in the works.

More darkroom in a couple of weeks.
I still have 2 darkroom montage images from 2008 to talk about,
and I'm still wading thru *many* images taken in Nevada last month, including petroglyphs. :-)
...sooo many fiery red rocks... and some awesome skies.
Posted by CaliforniaSilverwizard at 4:50 PM No comments: