Let's get back to the darkroom!

But first, a little self promotion - my first book is up for sale on Amazon:
www.amazon.com/dp/1364579138
There is a 'see inside the book' link, so you can preview it.
Here's the cover: 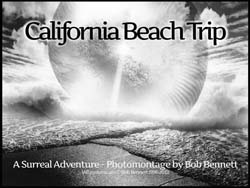 I read a recent article in 'High Country News':

I quote an excerpt:

"A stack of rocks left by someone who preceded us on the trail does nothing more than remind us that other people were there before us. It is an unnecessary marker of humanity, like leaving graffiti –– no different than finding a tissue bleached and decaying against the earth that a previous traveler didn't pack out, or a forgotten water bottle.  Pointless cairns are simply pointless reminders of the human ego."

It inspired the choice of this montage image, for this post: 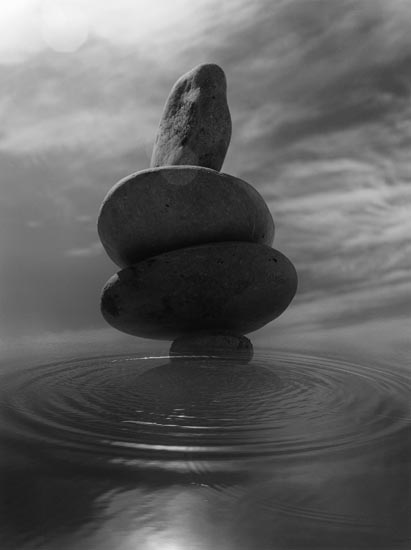 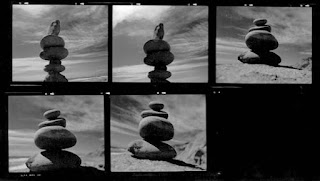 The second, the 'vibration' in the water. I actually created this by throwing a rock into a tide pool at the beach, and very quickly photographing it's effects, the circular ripples. Shot most of a roll to get a few that were good. I simply exposed each neg, dodged them out to blend w/ each other in the center. You've got to overlap the exposures to some degree so you won't get a lighter strip in the middle. My rule of thumb is: when in doubt, overlap more rather than less. I think you'll be glad you did :-)

To get back to the link from HCN at the beginning of the post?
Puh-leeze, dude! Lighten up, get some perspective. Humans have been altering the enviroment since prehistoric times. We won't stop now, in fact our effects are increasing daily. A few improvised sculptures are the least of our problems!

Yes, this is a very simple image, and yes, i have seen all the outrageous new imagery being done w/ newly released software, google stuff i think. And many of the images i see draw one question to my mind - how much of this is the original shot, and how much is digital?
Can you make a straight/unaltered shot that is worth looking at?
That's the question photographers had to answer not too long ago, but i guess it's irrelevant now.
Perhaps i am a dinosaur?... but happily so.

Here's another cairn i photographed, i think somewhere in Joshua Tree NP. 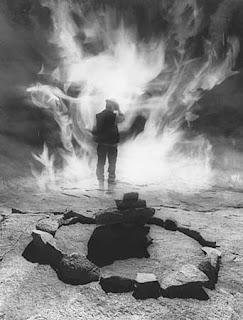 Needless to say the cairn has offered someone a new direction -
perhaps he is tipping his hat to his good fortune? 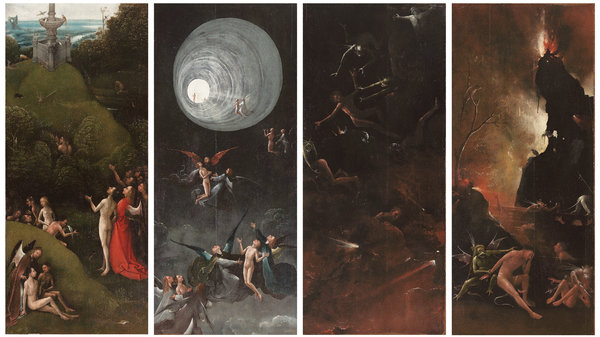 The Impious Delights of Hieronymus Bosch
A new exhibition celebrating the artist's 500th anniversary oddly presents him as a religious moralist.
BY ELLEN HANDLER SPITZ
March 25, 2016

I've taking in art since i was growing up in Maine, my mom wanted to give us 'culture', took us to see Winslow Homer, Andrew Wyeth, etc. I lived in/around Wash DC for 20+ years, home to many great museums.
Bosch blew me away immediately... still does. No one else like him.

https://en.wikipedia.org/wiki/Hieronymus_Bosch
-----------------
This is a bit of a tangent, but since there's a by the wind sailor here, maybe it's not so off the wall.
For thousands of years, sailors in the Marshall Islands have navigated vast distances of open ocean without instruments. Can science explain their method before it’s lost forever?

You know a Steve McCurry picture when you see one. His portrait of an Afghan girl with vivid green eyes, printed on the cover of National Geographic in June 1985, is one of the iconic images of the 20th century. McCurry’s work is stark and direct, with strong colors, a clear emotional appeal and crisp composition. His most recent volume of photographs, “India,” is a compendium of the pictures he took in that country between 1978 and 2014, and it also gives us the essential McCurry. There are Hindu festivals, men in turbans, women in saris, red-robed monks, long mustaches, large beards, preternaturally soulful children and people in rudimentary canoes against dramatic landscapes.

I'll be back again next month, probably to the desert. 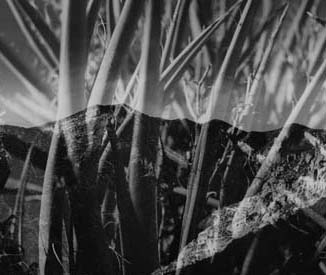 Posted by CaliforniaSilverwizard at 12:11 PM No comments:

Labels: Black and white darkroom montage, black and white photography, california beach, california coast, darkroom montage, photomontage, rock formation, surreal photomontage, surrealism
Newer Posts Older Posts Home
Subscribe to: Posts (Atom)
I do both traditional B&W darkroom work (most notably photomontage), and digital work.
So the post topics alternate between the two.
I still feel that I am at my best... in the darkroom.
http://www.bobbennettphoto.net/DarkRm2/index.html