Last darkroom day of my year-end 2012 darkroom binge, I did an image that had been haunting me for a while, but it was the sky that wasn't quite right. The basic part was a shot made in Red Rock Canyon, Nevada.
I walked past it on my way in to the canyon, and didn't 'see' it...
but on my way out, it knocked me in the head, like a 2x4 - the reflection of the landscape in the water, that's the key to this one.
I shot an entire roll on this one, on my Pentax 6x7, this is just part of it: 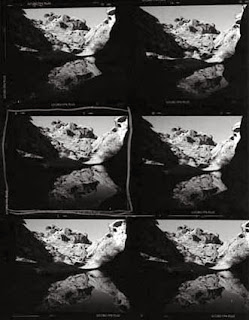 I had done PSD sketches of this one... and had overlaid an image of a wheel, a neg taken at the end of the trip: 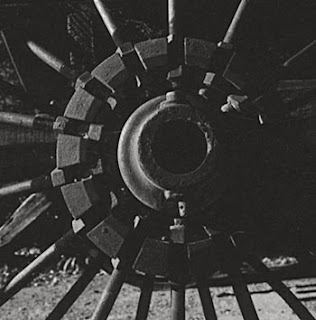 Funny how whatever i take on any particular trip just kind of 'finds a place' w/ other images, on the same trip. Is it because it is... 'the same trip'? 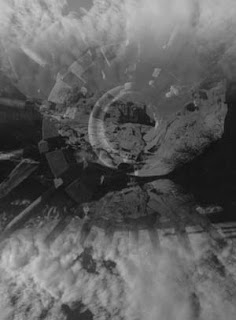 As usual, when i got down to printing, the sketch was just a starting point. I exposed the landscape first, dodging out the blank sky & some of the distant rockscape, and holding back the water at the bottom a bit. Then I added a much more interesting sky, both top and bottom, and developed one copy of that, I had 2 more sheets left. 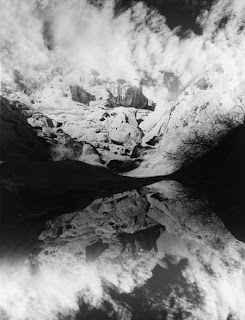 So I added the 'wheel', once again exposing top and bottom one at a time. 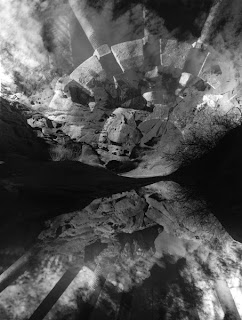 So it's 5 exposures all together. Took less than 2 hours, when i get goin', i really bang it out, not much hesitation.

I was recently featured at a site called 'Analog Advocates', the interview has a good bit to say about my process if you're interested:
http://www.analogadvocates.com/page/bob-bennett

The site itself is pretty interesting, guess alotta people haven't given up on film and it's many possibilities.
http://www.analogadvocates.com/

In the 'whatever catches my eye' file this month, 2 items, one very amusing:

And one, very thought provoking:

Happy shooting & printing, to one and all!
Posted by CaliforniaSilverwizard at 11:19 AM No comments:

Labels: Black and white darkroom montage, black and white photography, surrealism
Newer Posts Older Posts Home
Subscribe to: Posts (Atom)
I do both traditional B&W darkroom work (most notably photomontage), and digital work.
So the post topics alternate between the two.
I still feel that I am at my best... in the darkroom.
http://www.bobbennettphoto.net/DarkRm2/index.html