Where's the digital part of this photo blog?

If you've read the top of the sidebar to the right, i claim to alternate post topics between film/darkroom and digital. But I haven't kept that promise lately and you may well be asking: "Yo! blog writer, photo guy, DUDE! - Have you thrown digital under the bus or what?"

No I haven't, i just work on it rather fitfully, a love/hate relationship. There are some great things about digital, but do they outweigh the negative effects? I dunno.
Being an old fashioned analog film guy, it should come as no surprise that i think digital has just ruined photography as i knew it. 'Image quality'?... out the fucking window. I work at a place that does digital printing and we hear from people who think you can take an iPhone photo and print it 16x20" to look good, they think there's some magic in digital that will make that happen. Nope. Garbage in, garbage out.
Film cameras? the lense is the most important part. Digital cameras?...it seems to be an afterthought, a piece of cheap plastic. Focus? traditional cameras you can actually see it... digital cameras? you have to rely on an 'auto-focus' thing, sometimes it works fine, but occasionally, it's wacked out. You are helpless here...

In spite of the aforementioned complaints, the next few posts will be 'digital'.

When i work on digital montage, i slam something together, just to get the ball rolling, and it takes off. Other times, it just doesn't happen at all, it dies on the vine. But you gotta keep slamming something together to see what happens and not let it bother you if it dies. Some ideas 'have wings' & some don't. Learn to know the difference. Don't throw away the one's that don't immediately have wings, you never know what you might see in the future.
As for looking back over what you have done before, whatever state it is/was in? Here's a thought to consider:

A photography teacher a long time ago (in 1975-ish) suggested to all his students, me among them, that we should always look back over our contacts sheets, many times, that we would find images we had overlooked before, that were worth more then we originally thought.
Amen, brother, it is indeed true. But i don't take the same approach with film anymore.
When i am shooting film, i am hesitant, wary, not to waste a frame. I've developed a really good sense of what is darkroom montage material.
With digital? i totally take the opposite approach, i am flagrantly wasteful, shoot anything that strikes my fancy, there's no film or development cost whatsoever.
So i have many frames I shot wildly, that come back and sneak up on me.

Some of the more recent pix have taken on a life of their own, and landed in a collection i call 'symmetry'. Which after i reflect on it, reminds me of an old fashioned thing called a kaleidoscope.

"A kaleidoscope is a cylinder with mirrors containing loose, colored objects such as beads or pebbles and bits of glass. As the viewer looks into one end, light entering the other creates a colorful pattern, due to the reflection off of the mirrors. Coined in 1817 by Scottish inventor Sir David Brewster,[1] "kaleidoscope" is derived from the Ancient Greek καλός (kalos), "beautiful, beauty",[2] εἶδος (eidos), "that which is seen: form, shape"[3] and σκοπέω (skopeō), "to look to, to examine",[4] hence "observation of beautiful forms." [5]"

Another theme I play/work on is the beach, some sand, or small pebbles and some clouds, along with something else, something brought in by the waves.

Then there are some images that just 'happen', don't fit into these two themes.
I like to play with all the layer options and opacity, you find them at the very top of the layers palette. 'Normal' is the default, but click on that tab and check out the 20+ variations in the drop down menu, and 'party down', as they say :-)

So here's three images, and what went into them. 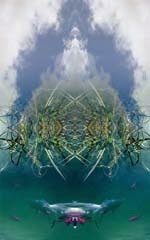 #1 - This one falls into the symmetry collection, I call it 'Koi Pond', the pond being on the Jack London estate that is now a historical park in No. California. Starting from the bottom: I selected an area, copied it to a new layer ( command+J). flipped it horizontally and moved it 'til it butted up to it's mirror image. I merged that onto another new layer - in the layers palette, choose 'merge visible' while holding down the option key so as not to lose the layers below. I flipped the layer vertically, moved it to be a 'mirror', and then added a layer mask that blended it out to white/nothing.
Then i added some sky, with the same 'copy and flip' routine, and added a layer mask that blended it into the pond below. Got that? If you're confused, have no fear, there's a link at the bottom of the post to a page at my site w/ larger images, and a link to download a small PSD file.

#2 - This falls into the 'beach' theme, it's some rather coarse sand at the bottom ( more like small pebbles burnished by the constant waves), then some waves, then some cirrus sky at the top. Overlaid on that, is a piece of driftwood, a marvelous sculpture, look at all the twists and turns goin' on! Once again, numerous layer masks to blend it all together.

#3 - "Rainy night" - a 'one-off' improvisation. I live in an apt. on the 4th floor, in downtown San Rafael, CA. the view is part urban, and part California hills, At night the lights sparkle, on & off, i have been trying to use 'motion' to create some blurry effects. Alotta frames didn't make it, but this one (below) did. 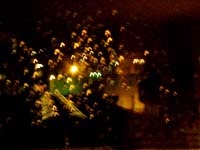 Then I added some rain, also shot at night, lit by the streetlamp. 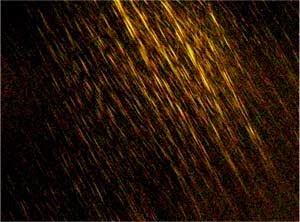 Larger images and small PSD files you can download at:
www.bobbennettphoto.net/BeachBlog_2014/WheresTheDigital/index.html

Posted by CaliforniaSilverwizard at 10:10 AM No comments:

Labels: digital photography, digital photomontage, photomontage, photoshop techniques, surrealism
Newer Posts Older Posts Home
Subscribe to: Posts (Atom)
I do both traditional B&W darkroom work (most notably photomontage), and digital work.
So the post topics alternate between the two.
I still feel that I am at my best... in the darkroom.
http://www.bobbennettphoto.net/DarkRm2/index.html